Addiction is a serious problem – and one that is rooted in misunderstanding. Many people who aren’t addicts mistakenly assume that those who are need stronger willpower or morals. This could not be further from the truth as drug addiction is a complex disease that, according to the National Institute on Drug Abuse, changes the brain in ways that make quitting difficult. And it affects all age groups across the entire spectrum. No one is safe.

According to a 2016 study by the NIDA, daily marijuana use amongst Future College Students and Young Adults remains a concern. The numbers break down thusly.

Marijuana use is at the highest level since the early 1980’s. 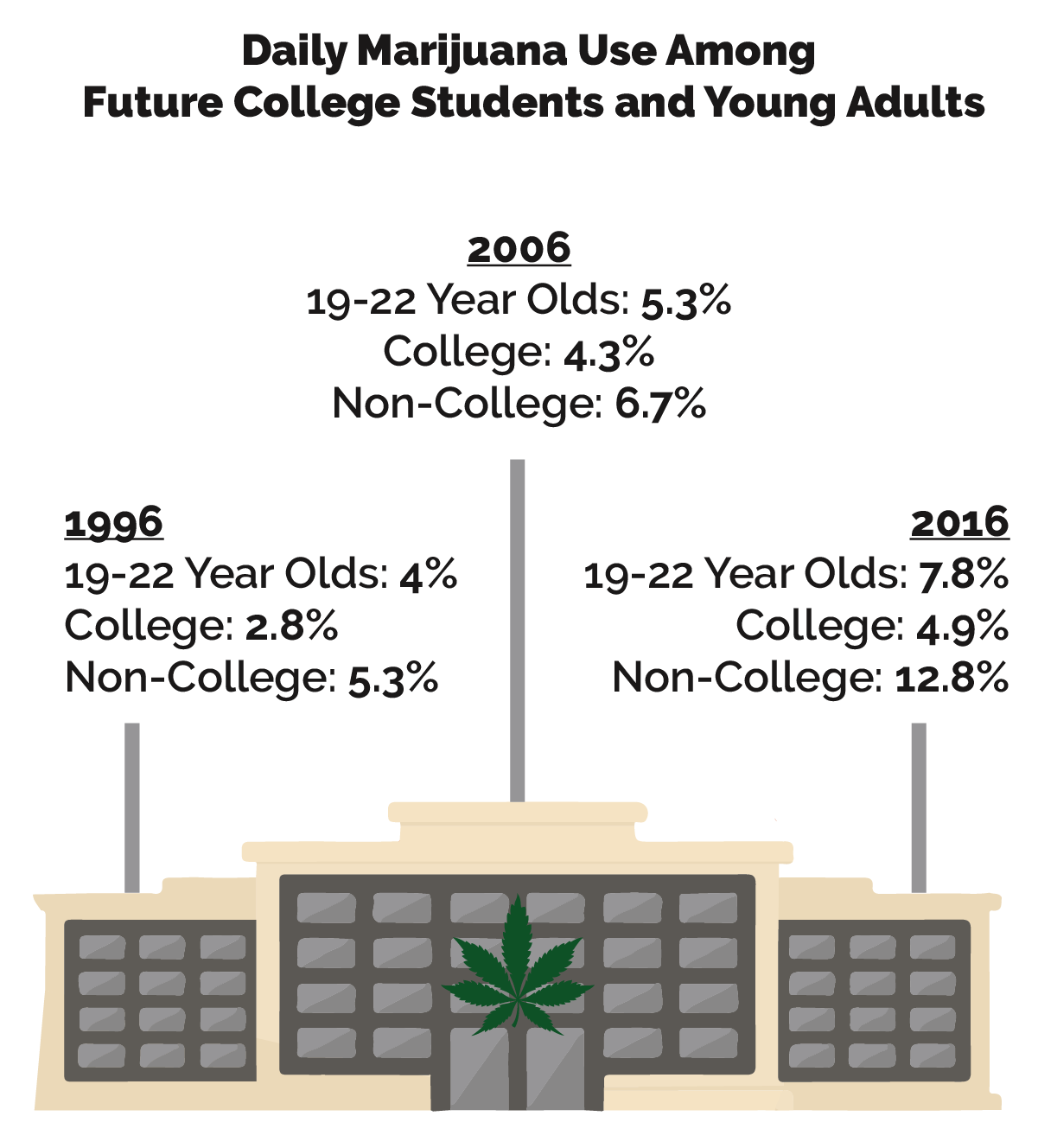 Heavy use of alcohol, however, appears to be higher in college students than non-college peers. Binge drinking is defined at five or more drinks in a row. Intoxication is defined as having been drunk.

The use of amphetamines appears to be higher in college students than non-college peers. Researchers think it highlights the trend of using these drugs to increase academic performance despite there being no evidence that these substances can increase performance in the long-term.

The annual National Survey on Drug Use and Health (NSDUH) is commissioned by the Substance Abuse and Mental Health Services Administration (SAMHSA). The following statistics were collated in 2013.

Illicit drug use in the United States has been increasing. In 2013, an estimated 24.6 million Americans aged 12 or older—9.4 percent of the population—had used an illicit drug in the past month. This number is up from 8.3 percent in 2002. The increase mostly reflects a recent rise in use of marijuana, the most commonly used illicit drug. 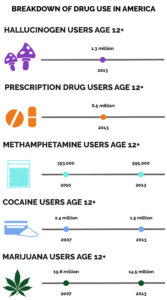 Use of most drugs other than marijuana has stabilized over the past decade or has declined. In 2013, 6.5 million Americans aged 12 or older (or 2.5 percent) had used prescription drugs non-medically in the past month. Prescription drugs include pain relievers, tranquilizers, stimulants, and sedatives. And 1.3 million Americans (0.5 percent) had used hallucinogens (a category that includes ecstasy and LSD) in the past month.

Most people use drugs for the first time when they are teenagers. There were just over 2.8 million new users of illicit drugs in 2013, or about 7,800 new users per day. Over half (54.1 percent) were under 18 years of age. More than half of new illicit drug users begin with marijuana. Next most common are prescription pain relievers, followed by inhalants (which is most common among younger teens).

Drug use is highest among people in their late teens and twenties. In 2013, 22.6 percent of 18- to 20-year-olds reported using an illicit drug in the past month. Drug use is increasing among people in their fifties and early sixties. This increase is, in part, due to the aging of the baby boomers, whose rates of illicit drug use have historically been higher than those of previous generations.

Fewer Americans are smoking. In 2013, an estimated 55.8 million Americans aged 12 or older, or 21.3 percent of the population, were current cigarette smokers. This reflects a continual but slow downward trend from 2002, when the rate was 26 percent. 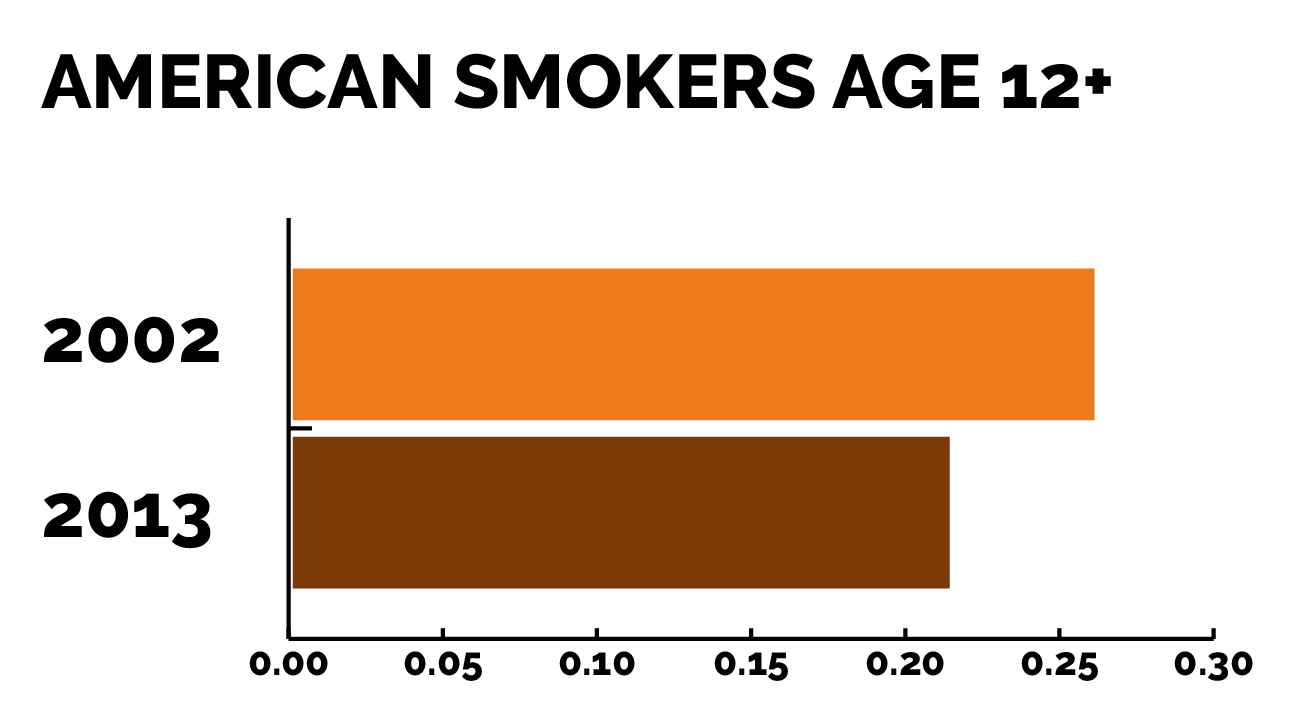 According to the Substance Abuse and Mental Health Services Administration (SAMHSA),

Youth transitioning into adulthood have some of the highest rates of alcohol and substance abuse. For instance, rates of binge drinking (drinking five or more drinks on a single occasion) in 2014 were:

In one survey of around a thousand adolescents between 12-17 years old, 75% said they felt peer pressure or influence to engage in either drug or alcohol use when they saw their peers smoking or drinking on social media. The most common age group to see drug abuse and addiction is mid-teens to mid-twenties. It is far more probable to see in someone in the 18-25 range, according to the majority of government data.

The Office of Adolescent Health breaks down a 2015 report on Adolescent Substance Abuse Facts thusly:

Percent of high school students who report they never tried cigarette smoking (even 1 or 2 puffs):

Percent of high school students who report they smoked cigarettes on at least 1 day (during the 30 days before the survey):

Percent of high school students who report they tried to quit smoking cigarettes (among students who currently smoked cigarettes, during the 12 months before the survey):

Percent of high school students who report they usually obtained their own cigarettes by buying them in a store or gas station (during the 30 days before the survey):

Percent of high school students who report they used chewing tobacco, snuff, or dip on at least 1 day (during the 30 days before the survey):

Percent of high school students who report they used electronic vapor products including e-cigarettes, e-cigars, e-pipes, vape pipes, vaping pens, e-hookahs, and hookah pens on at least 1 day (during the 30 days before the survey):

According to research by SAMHSA, there are about 43.1 million people ages 65 and up living in America. This population group is expected to account for about 20% of the total U.S. population by 2030. 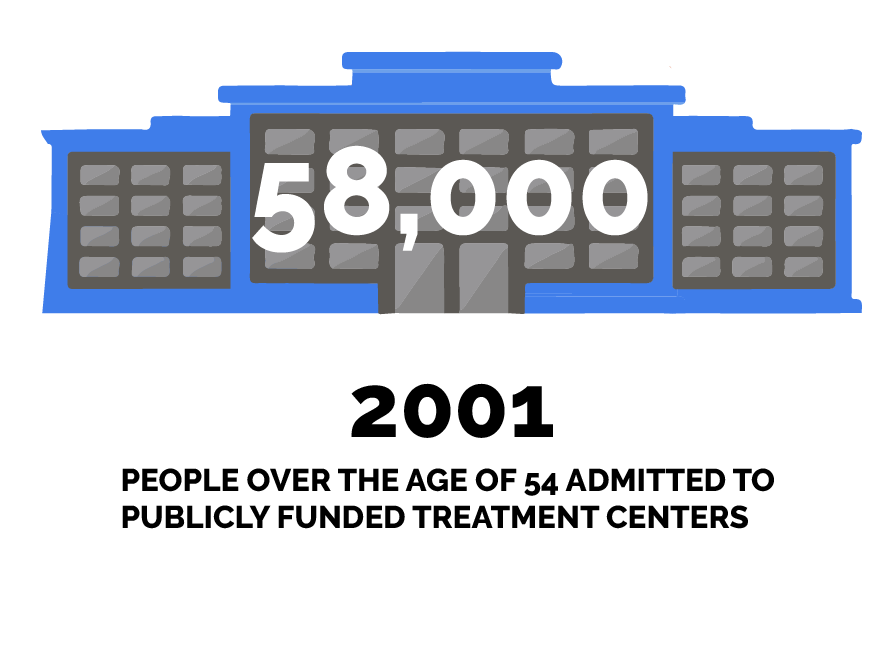 Around 17% of adults over the age of 61 abuse alcohol or misuse prescription medications, and these numbers are looked at as rising as more baby boomers enter older adulthood. 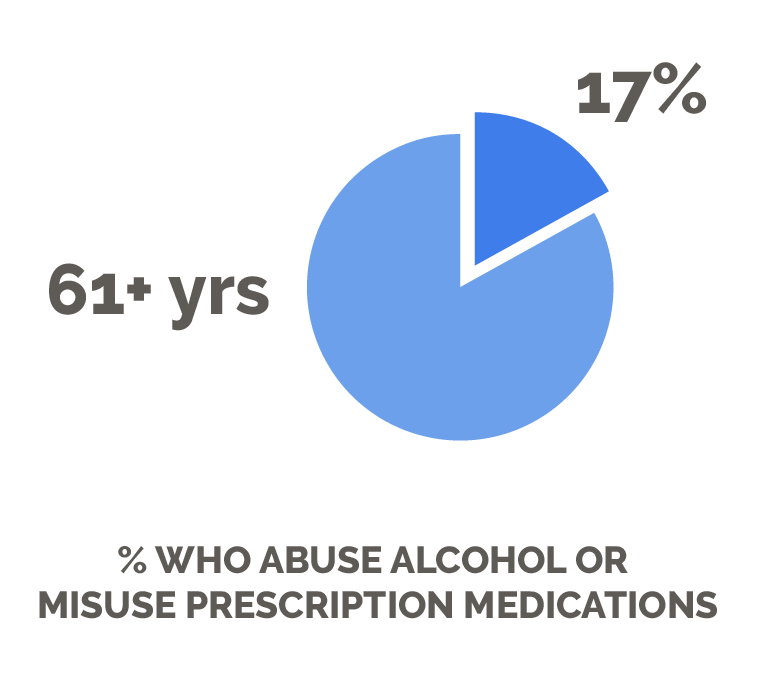 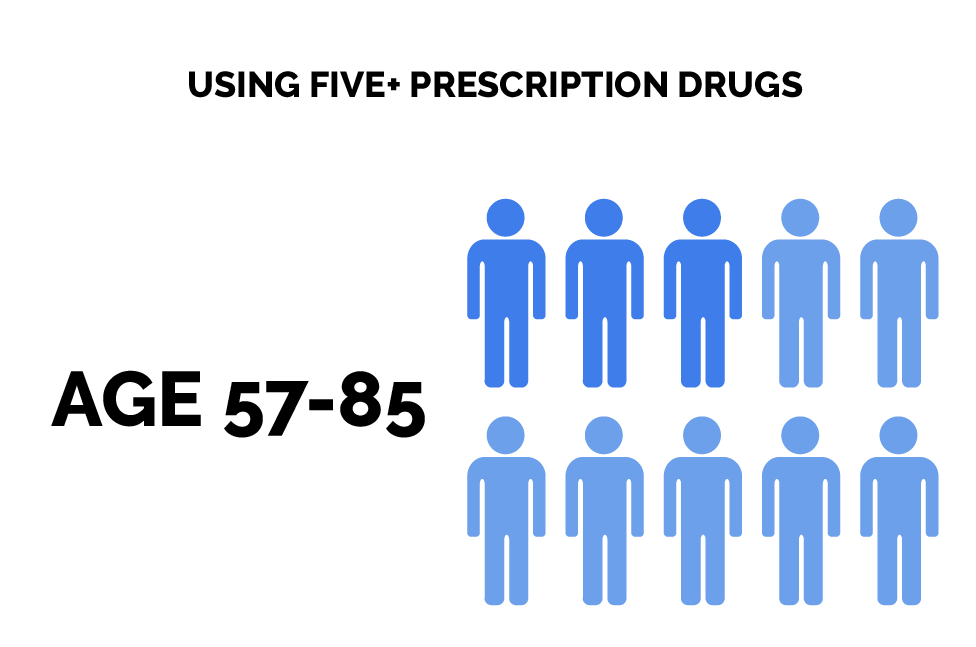 Almost three in every 10 people aged 57 to 85 in the US use a minimum of five prescription drugs. And among the elderly, both opioids and benzodiazepines are amongst the most popular prescribed medications.

The amount of substance use disorders among older adults remains relatively constant until they reach the age of 60. After that, the rate of those disorders drops to about 6%.

On an average day in 2011, there were 2,056 drug-related Emergency Department (ED) visits by older adults, of which 290 involved illegal drug use, alcohol in combination with other drugs, or nonmedical use of pharmaceuticals. Nonmedical use includes ED visits where the patient misused a medication, took more than the prescribed dose of a medication, took a medication prescribed for another individual, or was poisoned by another person. On an average day in 2011, these substances were involved in the following numbers of visits:

SAMHSA believes that substance use among older adults is a public health concern that could increase in the future, especially as the baby boom generation ages. Although older adulthood is not typically associated with substance use, the findings in this report revealed that there are some areas of concern for this population. For example, regarding use of two of the most common substances in the United States, this report shows that on an average day, 6.0 million older adults used alcohol and 132,000 older adults used marijuana.

According to NIH, while substance abuse in older adults is often unrecognized – and therefore untreated – research indicates that currently available addiction treatment programs can be as effective for them as for younger adults.

Addiction comes in many forms and affects people of all ages, sexes, religions, and everything else you can think of. Think of it this way; if you are human, you are susceptible to addiction. And if you are an addict, then you need to find the treatment that is best for you before it is too late.

This guide is intended to be informational. If you are considering help for you or your loved one and would like more information, please consult a medical professional or licensed treatment facility.