Thankfully, there are numerous facilities across the country, and in southern California, that offer specialized services for this vulnerable population. The most effective rehab and mental health facilities for LGBTQ individuals assist with problems stemming from abuse, trauma, violence, harassment, and stigmatization. These customized treatment centers also help connect LGBTQ sufferers with peers who understand their unique struggles. The following guide will explore rates of abuse and addiction within the LGBTQ community and where members of this group can go to get treatment.

How do substance abuse rates differ within the LGBTQ community?

Incidences of addiction with a co-morbid mental health disorder rates are higher among individuals who identify as homosexual, bisexual, transgender, or somewhere else within the gender or sexuality spectrum. According to recent statistics: 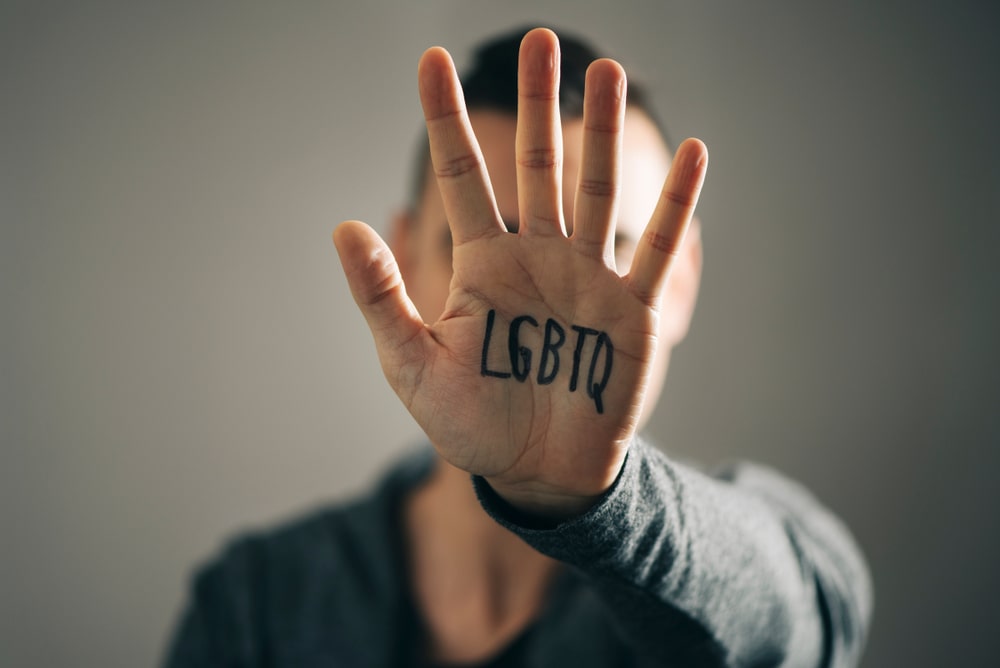 Adolescent LGBTQ persons report higher rates of substance abuse than their non-LGBTQ peers. LGBTQ teens are 90% more likely to abuse substances than their heterosexual peers. When it comes to subpopulations, bisexual teens are 3.4 times more likely to abuse substances. Lesbian and bisexual girls use substances at four-times the rate of their heterosexual counterparts. Overall, LGBTQ persons are at higher risk of alcohol addiction and substance abuse than the general population. And unfortunately, these risks are pronounced during the teen years.

Members of marginalized groups such as the LGBTQ community have faced unique, entrenched challenges that make it difficult for them to obtain healthcare without judgment or bias. These challenges can be especially pronounced in the area of substance abuse and addiction treatment. Thankfully, there has been a shift in public perceptions and attitudes toward those who identify as LGBTQ. It’s easier than only a few short years ago for LGBTQ individuals to obtain substance abuse and mental health treatment.

Recently, some common substance abuse treatment modalities have been shown to be useful for gay and bisexual men. Effective modalities include motivational interviewing, social support therapy, contingency management, and cognitive behavioral therapy. Addiction rehabilitation centers that offer specialized programs for gay and bisexual men demonstrate better outcomes than non-specialized programs. The unfortunate matter is that only about 7% of plans offer specialized services for LGBTQ persons. 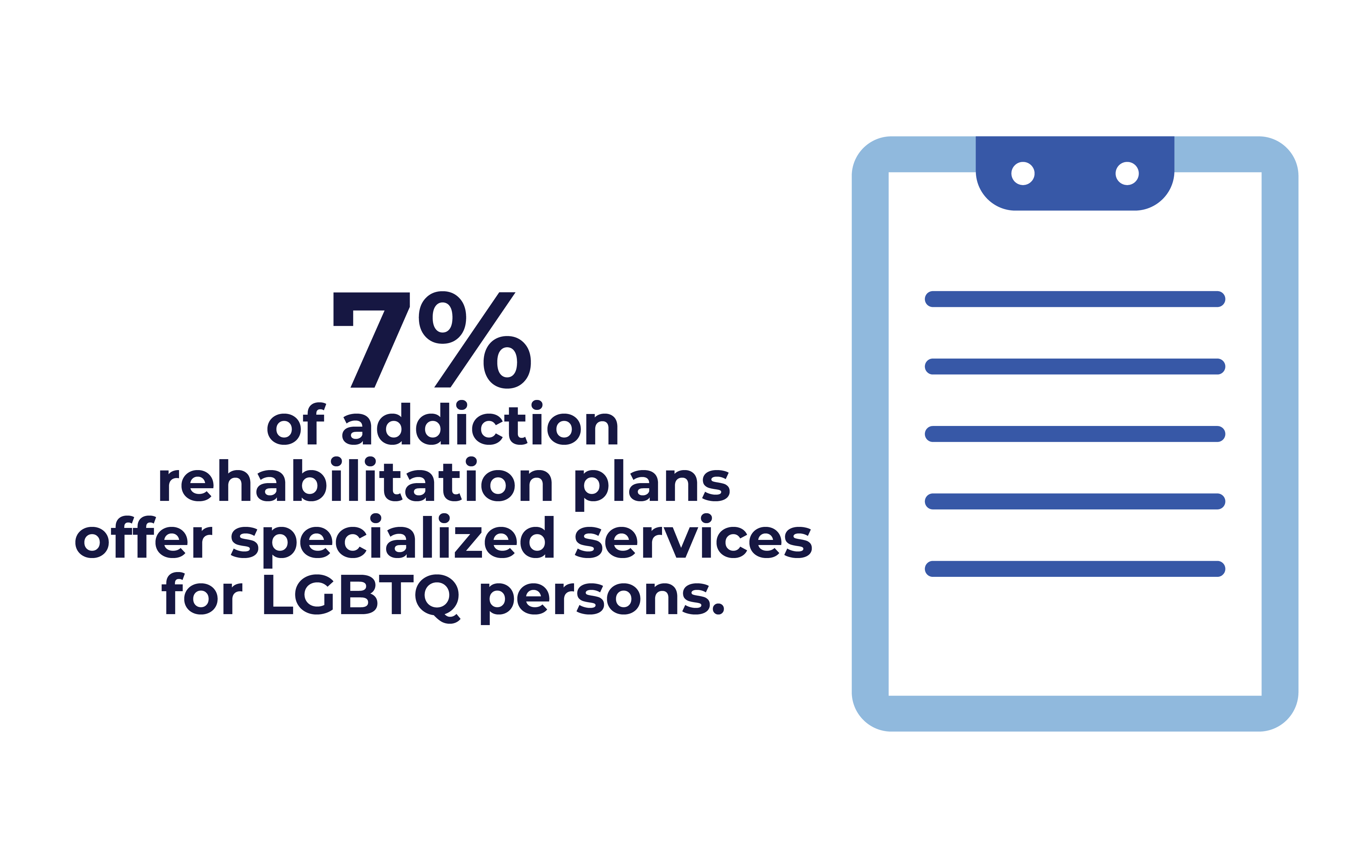 Current studies also indicate that transgender individuals are more likely than their heterosexual peers to seek treatment for substance abuse. The problem occurs when these people can’t find centers that cater to their specific needs. Current research suggests that treatment for LGBTQ people needs to address unique factors in their lives that pertain to homophobia, transphobia, family of origin issues, violence, and social isolation.

Another issue facing LGBTQ persons is the increased risk of HIV due to intravenous drug use and risky sexual behavior. HIV is particularly prevalent amongst bisexual and gay men and also transgender women who have sex with men. Effective substance abuse treatment can help prevent the transmission of HIV amongst high-risk populations. Those who have HIV and have sought effective addiction treatment report improvements in viral load. Addiction treatment is also associated with reduced drug use and risky sexual behavior among gay and bisexual men.

What are the comorbidity rates in the LGBTQ community? 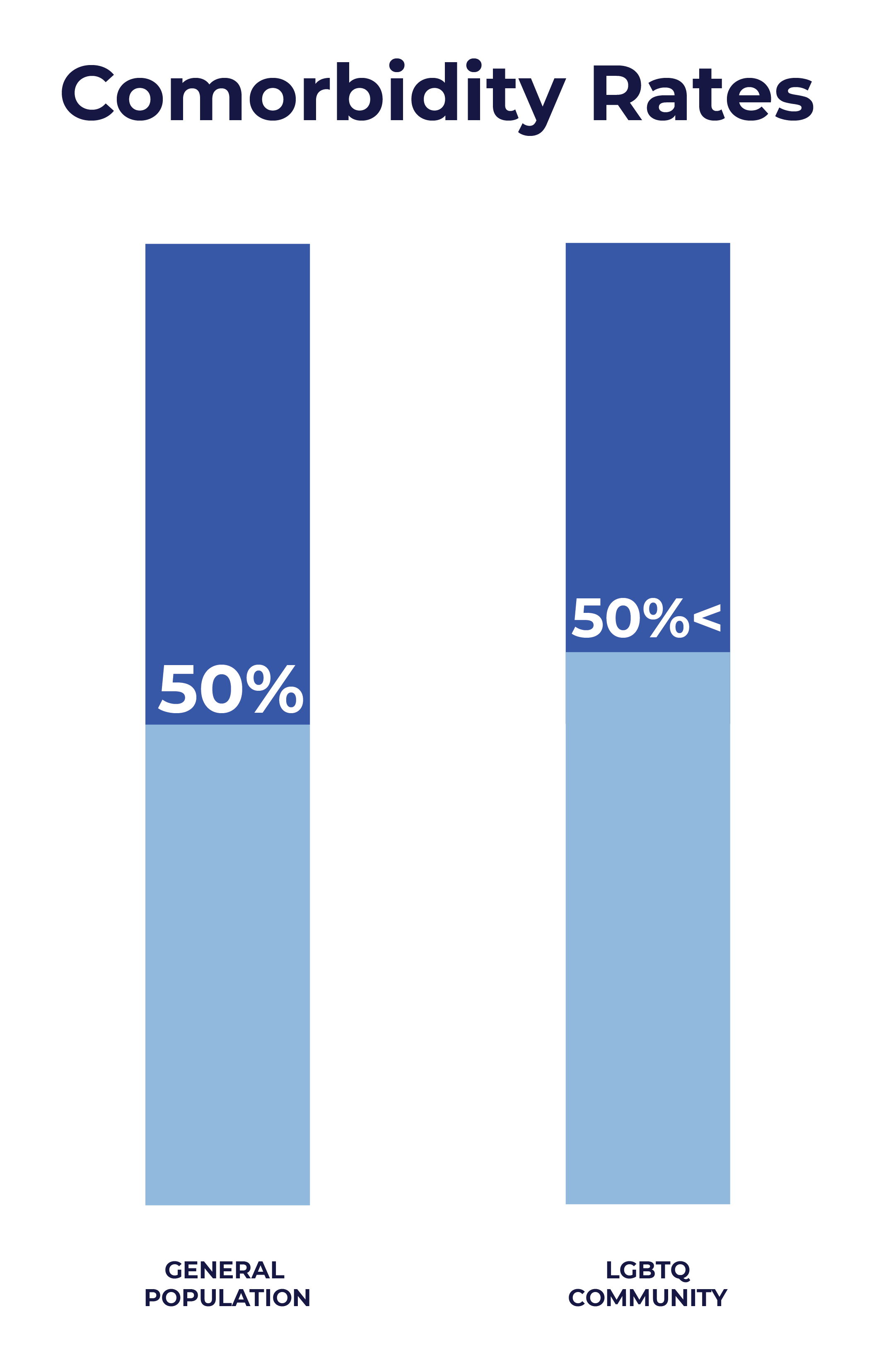 LGBTQ people face stigma and prejudice at levels that heterosexual people do not have to deal with on a day-to-day basis. Suffering from a mental health disorder comes with a societal stigma attached to it regardless of a person’s sexual identity or gender. But LGBTQ individuals face increased stigma because of their sexual orientation or gender identity. This can make it more difficult for them to seek treatment for substance abuse and a co-occurring psychiatric disorder.

Sexual minorities with substance abuse disorders are more likely than the general population to suffer from comorbid or co-occurring psychiatric disorders. LGBTQ persons are three times more likely to experience depressive episodes and general anxiety disorder. Gay and bisexual men and lesbian and bisexual women report more frequent episodes of mental distress and depression than their heterosexual peers. Transgender children and teens report greater levels and incidences of depression, suicidal ideation, self-harm, and eating disorders than their non-transgender counterparts. For rehab patients who identify on the LGBTQ spectrum, it is important that they are screened for psychiatric problems and to have those problems treated in tandem with the substance abuse disorder.

LGBTQ individuals are at higher risk of suicide because they lack peer support and face increased levels of harassment and barriers to mental health treatment. For LGBTQ people ages 10 – 24, suicide is the leading cause of death. LGBTQ children and teens are four times more likely to attempt suicide than their heterosexual peers. 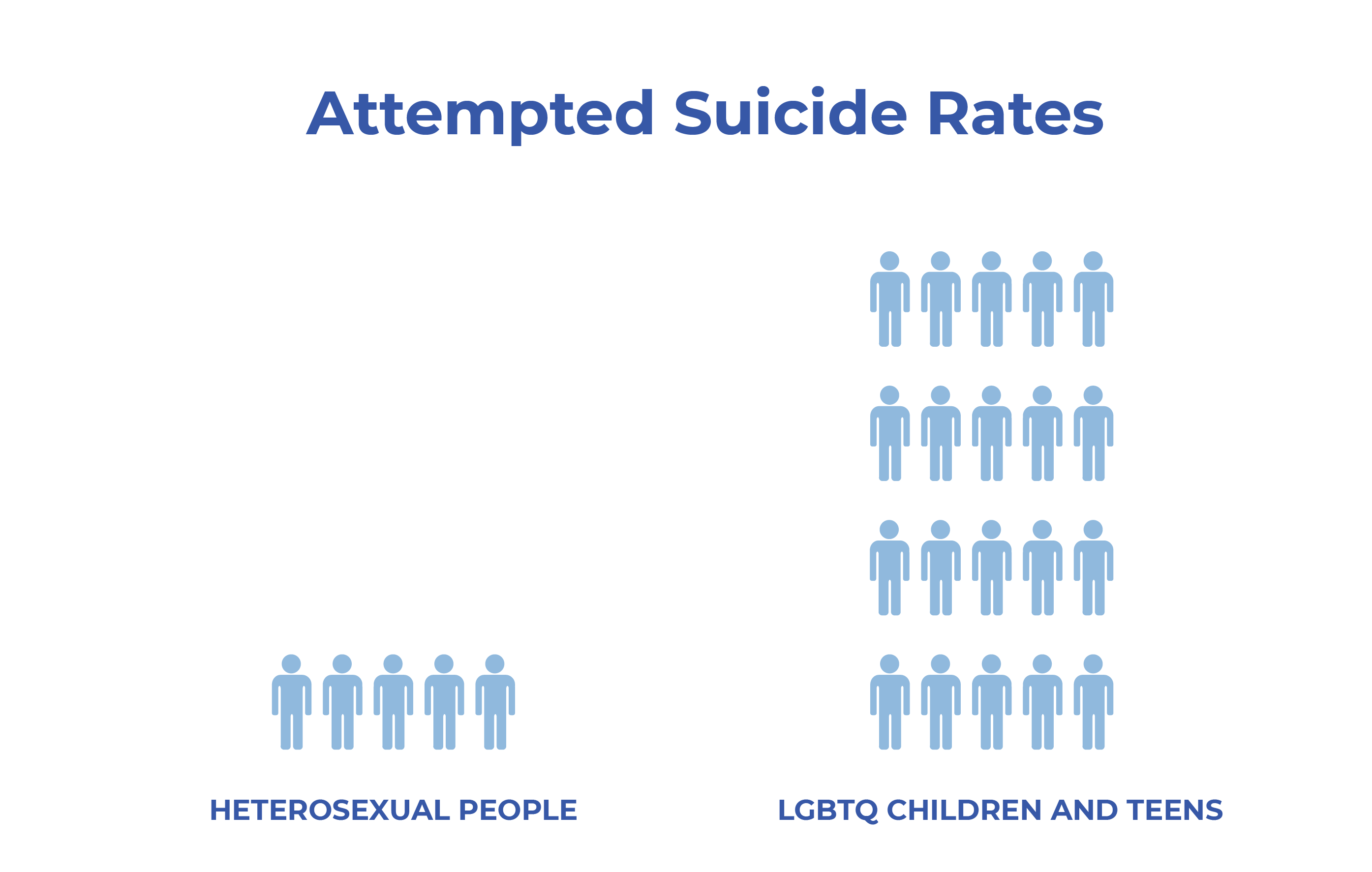 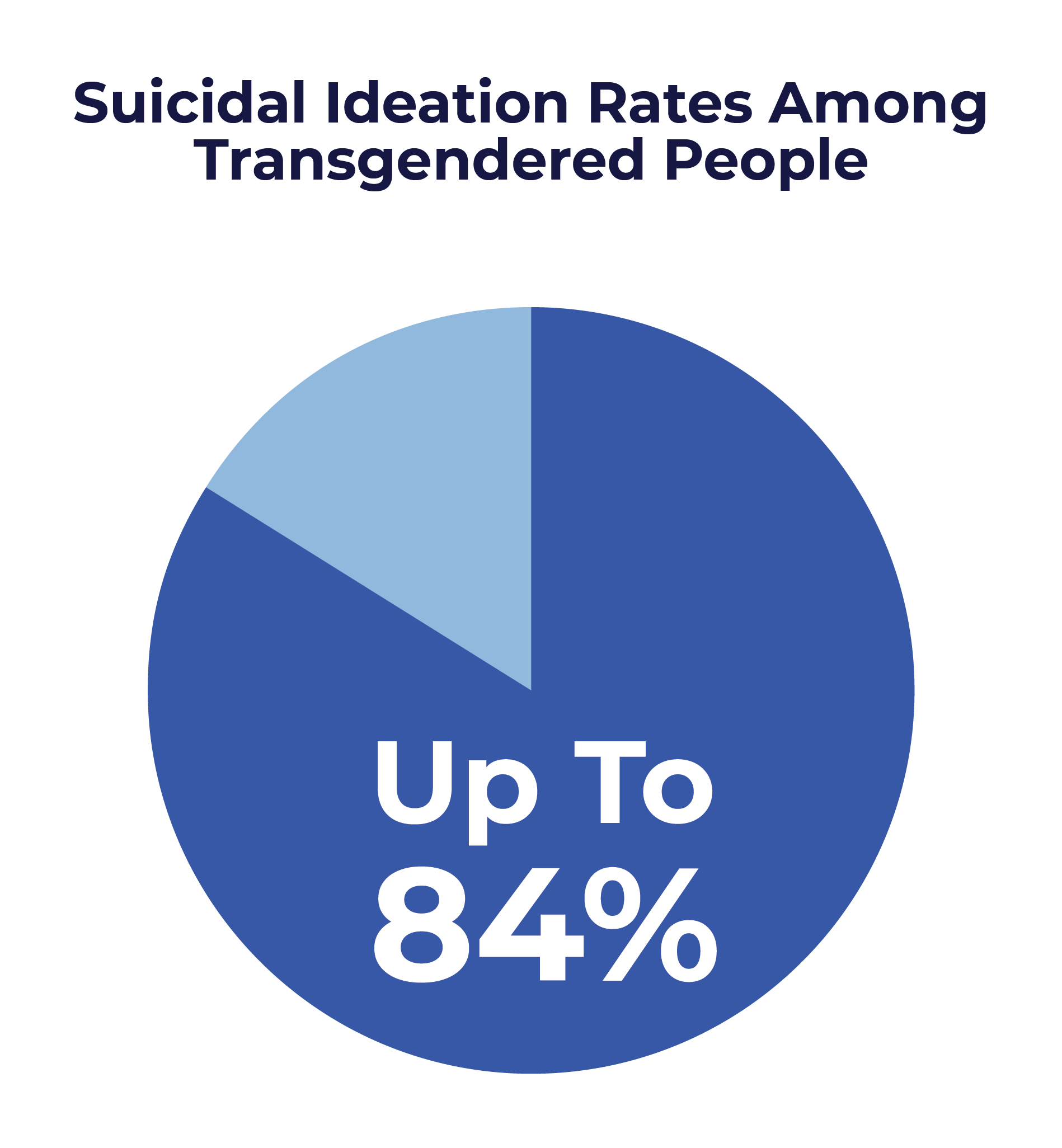 Between 38% and 65% of transgender teens and adults experience suicidal ideation. Research indicates that family support or a lack of it plays a significant role in affecting the likelihood of an LGBTQ person attempting suicide. People who face rejection when coming out to their families are eight times more likely to attempt suicide than some whose family accepts them after revealing their sexual orientation.

What are the disparities in care that LGBTQ people face when seeking treatment for substance abuse and mental health disorders?

People who identify as LGBTQ have historically experienced discrimination throughout their personal relationships and within the public sphere. Society is changing, but there is still a lot of work to do when it comes to eliminating discrimination against sexual minorities. Studies from the American Journal of Public Health demonstrate the cost of constant bias against sexual minorities – LGBTQ persons who experience multiple forms of discrimination in their lives are four times more likely to turn to drugs and alcohol as a coping mechanism. Contributing factors to substance use and the LGBTQ community include:

The stigma against the LGBTQ community is what contributes to the higher rates of drug abuse and comorbid mental health issues in this vulnerable population. Treatment won’t be successful if it perpetuates discrimination, misunderstands LGBTQ people, or fails to address their needs and the pain they experience.

How can treatment facilities meet the needs of LGBTQ individuals successfully?

Treatment centers that are friendly toward LGBTQ persons and recognize the problems they face can implement effective, customized methods into their practices. Centers need to develop rehabilitation approaches that help their patients with LGBTQ-specific issues. Recent studies indicate that there are particular issues that rehab facilities need to address to better serve this vulnerable population:

Fortunately, there has in recent years been a positive shift in societal attitudes towards sexual minorities. Within the drug and alcohol rehabilitation industry, there is a growing understanding of what this population needs for effective substance abuse and mental health treatment. But some groups may have underlying, hidden biases that may counteract their positive intentions. For LGBTQ individuals who are seeking treatment for substance abuse and mental health issues, it is important to find a facility that meets their needs.

What should LGBTQ persons look for in a rehab facility?

Treatment centers that include medically-supervised detox programs along with inpatient rehab are more successful at facilitating long-term recovery for all subsets of the population. However, stress is a massive factor in relapse rates. All people in recovery for drug and alcohol addiction need long-term maintenance plans and support groups in place to help them cope with outside stressors. Maintenance plans are effective at preventing relapse. And if a relapse does occur, airtight maintenance plans help people get treatment for relapse, meaning it won’t last as long or be as intense. For LGBTQ people, they need to find a program that acknowledges their specific needs and provides the right amount of support for issues they will most likely encounter both during rehab and after rehab. For example:

When choosing a residential rehab center, it’s crucial for LGBTQ patients to find out whether transgendered people will be placed with others of their self-identified gender. If they are forced to reside with their assigned at birth gender, this may perpetuate the stigma they face. They will experience increased stress levels and emotional struggles that contributed to their substance abuse. It’s crucial that a rehab facility places their transgender patients with other patients of their identified gender. Rehab patients need to be given respect and understanding of their identity for a more effective recovery.

LGBTQ patients have higher rates of dual diagnosis. People in this community often present with increased rates of adverse mental health conditions. They will require a treatment program that can adequately address and treat this issue along with the substance abuse disorder. A drug and alcohol treatment program that is tailored to the patient’s specific needs is the most effective way to treat a substance use disorder and a comorbid diagnosis.

What resources are available to help LGBTQ persons find an LGBTQ-friendly rehab center?

Addiction and abuse are painful and isolating. Going through that kind of struggle and dealing with discrimination on top of it is even more challenging. LGBTQ people need to find a rehab center that is sensitive to their needs and can tailor a treatment program for them. Thankfully, there are several resources available that can help patients find an LGBTQ-inclusive provider.

It is essential that individuals who identify as LGBTQ find a treatment facility that is sensitive to their needs. Individuals who attend and complete customized rehab programs are more likely to remain drug-free for life. If you or a loved one identify as LGBTQ and are struggling with substance abuse, don’t hesitate to reach out to a qualified rehab counselor today and get the treatment you need.

This guide is intended to be informational. If you are considering help for you or your loved one and would like more information, please consult a medical professional or licensed treatment facility.