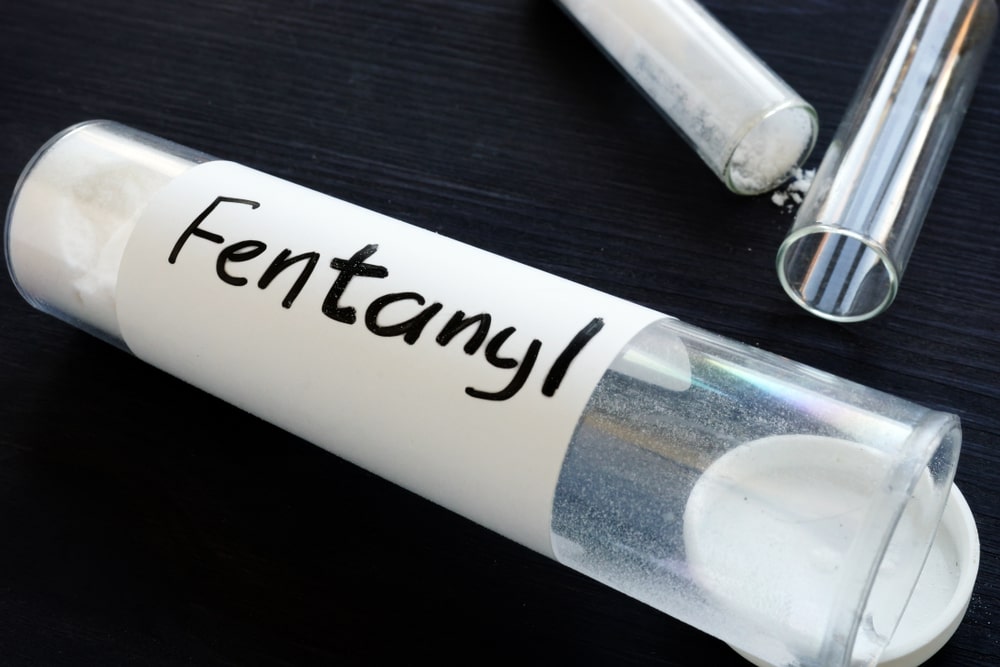 Fentanyl is an incredibly powerful prescription opioid drug that is between 80 and 100 times stronger than morphine. In 2017, there were more than 70,000 drug overdose deaths in the United States, with the highest increases in overdose deaths attributed to fentanyl.

Fentanyl patches, shots, and lozenges are used to treat severe pain from cancer, surgical recovery, or the drug is given to patients with chronic pain that other synthetic painkillers cannot treat. The drug is incredibly addictive, and dealers will sometimes mix heroin with fentanyl to create a potent chemical that gets people hooked quickly. Unfortunately, heroin combined with fentanyl is deadly, and “bad batches” of heroin laced with fentanyl have caused many deaths.

How is fentanyl used?

Fentanyl is a prescription painkiller that is given as either a shot, a patch, or a lozenge. Illegally sold fentanyl comes in a powder form and is either dropped onto blotter paper, made into pills, or put in eye drops or nasal sprays. Dealers will sometimes mix fentanyl powder with heroin, methamphetamine, cocaine, or MDMA. People who take these street drugs are unaware that what they are ingesting is laced with fentanyl, increasing the chances of someone experiencing an accidental and fatal overdose.

How does someone become addicted to fentanyl?

The human brain is full of natural opioid receptors that play a role in controlling pain and regulating a person’s emotions. When someone takes an opioid drug like fentanyl, these receptors are activated. Because the human body possesses these receptors, drugs like fentanyl are incredibly addictive. The tolerance window for opioid drugs is tiny, and it doesn’t take much of the substance or a long period of time for someone to build up a tolerance and become both physically and emotionally addicted to fentanyl. This process by which the opioid receptors become activated is one of the reasons why medications like methadone can help people maintain sobriety once they initially recover from a fentanyl addiction. Methadone and medicines like it bind to the opioid receptors and block them.

What are the side effects of taking fentanyl?

What are the signs of fentanyl addiction?

If a person starts taking too much of their prescription fentanyl, they are abusing the drug. People who are addicted to fentanyl may try to “doctor shop,” or tell their doctor that they lost or accidentally threw away their prescription in the hopes of obtaining more drugs. They may also try to steal a friend or a family member’s fentanyl prescription. Anytime a person uses a prescription drug in a way that it was not intended for use or they do not follow their doctor’s directions for the correct dose, they are abusing the drug and are exhibiting definite signs of addiction.

What are the signs of a fentanyl overdose?

Fentanyl is exceptionally potent, and the risk of overdosing accidentally on fentanyl is high. People who are addicted to prescription fentanyl can take more than the allotted dose in an attempt to bypass their body’s tolerance levels and experience a euphoric high. Sometimes, taking fentanyl can make people confused or forgetful, and they can take an additional dose by accident. If a street drug is laced with fentanyl, a user won’t know it, and they can accidentally overdose. As soon as someone begins exhibiting the following signs of a  fentanyl overdose, it is crucial that a witness calls 911.

What are the symptoms of fentanyl withdrawal?

Because of the way fentanyl and opioid drugs like it interact with the brain, it is an incredibly addictive drug that is difficult to quit. Once someone has developed a tolerance and a physical and emotional addiction to fentanyl, withdrawal symptoms will start as soon as they miss a dose of the drug. While fentanyl withdrawal symptoms usually aren’t fatal, they are extremely unpleasant and painful. Also, prescription opioid drugs like fentanyl and street heroin will induce long-lasting, extreme cravings in a recovering user. These extreme cravings, characteristic of opioid drugs, are one of the reasons why it is so hard for people to quit without ongoing outside intervention and help.

How is fentanyl addiction treated?

Fentanyl addiction is treated in a similar way to other addictive substances. But the treatment timeline and protocol for fentanyl addiction will differ based on the individual’s needs and the extent of their addiction. Usually, medical detox and inpatient rehab are recommended for fentanyl addiction. People in recovery often need access to prescription medications like methadone to help them remain sober and free from fentanyl cravings and long-lasting withdrawal symptoms.

Once they enter a rehab facility and complete initial treatment, patients have access to a team of trained doctors and therapists who can help them create and follow through with ongoing maintenance and aftercare plans. People recovering from fentanyl addiction usually need to attend consistent one-on-one therapy sessions, group therapy, and sometimes even family therapy to maintain sobriety and increase their chances of avoiding relapse.

Are you or a loved one struggling with fentanyl addiction and dependence? It’s never too late to reach out for help. The experienced counselors, doctors, and mental health professionals at Mission Harbor Behavioral Health are standing by to answer your questions about rehab. Please contact Mission Harbor today to learn more about your treatment options.