What is Meth Mouth and the Other Signs of Meth Abuse?

Over half a million people in the U.S. abuse methamphetamine. Tragically, methamphetamine abuse will lead to a variety of severe and often irreversible health problems. Methamphetamine is a powerful, stimulant drug that drastically increases blood pressure, heart rate, and induces strong delusions and paranoia. Long term meth abusers may also suffer from brain damage and memory loss, depression, and anxiety disorders after they achieve sobriety.

It is critical that a person who starts abusing meth gets into treatment quickly before these health problems can arise and become permanent. Severe and heavy methamphetamine abuse can also cause organ failure, stroke, heart attacks, and death. To compel a loved to get treatment, it’s critical that family members and loved ones understand the subtle and not-so-subtle signs of meth abuse before tragedy strikes.

What are the most common signs of meth abuse and addiction?

Meth abuse shares many of the same symptoms that are common in other drug addiction disorders. Drug addiction affects every facet of a person’s life – physically, emotionally, mentally, and behaviorally. But methamphetamine abuse has a few signs that are particular to the drug, including the notorious “meth mouth” which will be explored below. But in general, if a loved one is exhibiting the following signs, they could be abusing meth or another stimulant drug.

Methamphetamine, or crystal meth, can be smoked, snorted, ingested, or injected. Smoking the drug is the most common way it is abused, but the way a person uses meth can also cause them to exhibit certain signs.

A person who injects meth will have trace marks on their skin, and they may pick at them. Family and friends may also find evidence of the drug, which looks like a white, crystalline powder that is odorless, or a looks like tiny, clear crystals that resemble ice shards. The drug powder or crystals can also be pink, yellowish- gray, or even brown. 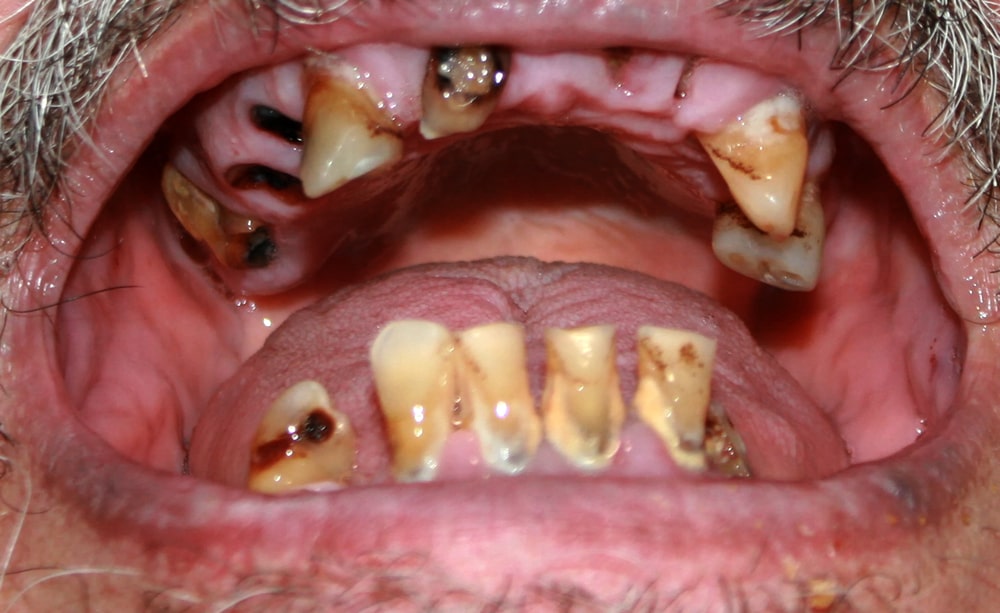 What is meth mouth?

Methamphetamine is made out of strong, powerful industrial chemicals that are corrosive to the body. When someone smokes or ingests meth, they will rot their teeth, gums, and the sensitive tissues of the mouth. Meth users will lose their teeth, experience painful oral sores, and abscesses, and may even lose parts of their mouth like the tongue, tonsils, or parts of the lip. 31% of long term meth abusers will lose six or more of their teeth. The acids in the meth are what cause severe dental corrosion, and it is irreversible. Losing teeth or oral soft tissues to infection and decay can affect the way a person eats and talks for the rest of their life.

Because methamphetamine is such a powerful drug, people often get addicted the first time they try it. As a person continues to take meth to feed their addiction, their body and brain become addicted to having the substance circulating in their system. Unfortunately, this process of dependence and tolerance means that the person must take more and more meth to maintain a high. When they don’t, they experience a massive crash in energy levels and their mood. Withdrawal symptoms will start to manifest.

To avoid this crash, meth addicts will keep taking more and more meth until they build up such a tolerance that they can’t feel a euphoric high anymore. When this occurs, it’s called tweaking. The individual will feel frantic, anxious, and afraid. They may hallucinate that bugs are crawling on or inside their skin, and they will scratch and pick at themselves. “Tweakers” will sometimes lose touch with reality, and become aggressive and hurt themselves or others.

Can methamphetamine abuse look similar to addiction to another drug?

Why is it so critical that meth abuse is caught early and treated?

Methamphetamine abuse can cause a range of very serious health problems and irreversible physical and mental damage. Meth can cause scarring, tooth and bone loss, organ failure, heart problems, and permanent memory loss. People who recover from long term meth abuse often struggle with the ability to understand abstract thoughts, and will have trouble controlling mood swings for the rest of their lives without outside intervention. Studies have found that long-term meth abusers experience changes in the brain that are similar to those seen in Alzheimer’s and dementia patients. Methamphetamine abuse doesn’t just age a person on the outside, but significantly ages and damages a person internal systems and organs.

Are you concerned that a loved one is abusing methamphetamine? It’s critical that they receive treatment for addiction before damage from meth becomes irreversible. The caring and dedicated drug addiction counselors and therapists at Mission Harbor Behavioral Health have helped hundreds of people overcome drug abuse and addiction. Please contact the specialists at Mission Harbor today to see what they can do to help your family during this painful time.