Parents often worry about someone hurting their son or daughter. But when teenagers engage in acts of self-harm and hurt themselves, it can be overwhelming, confusing, and terrifying for their family and loved ones.

There are many reasons why children self-harm, and for most, self-harming behaviors are not attempts at suicide. However, self-harming behaviors can be indicative of depression in teenagers and young adults. Untreated depression and other mental health disorders can increase a teen’s risk of suicide and self-injury. It’s crucial that parents and guardians understand why kids self-harm, and where to turn to for help.

Discovering that your son or daughter is self-harming can be scary, but there are many ways that parents, guardians, and therapists can help teens cope with overwhelming emotions without resorting to hurting themselves. Today’s article will discuss why teens self-harm, what factors put them at risk for these behaviors, and what parents can do to get their child the help they need. 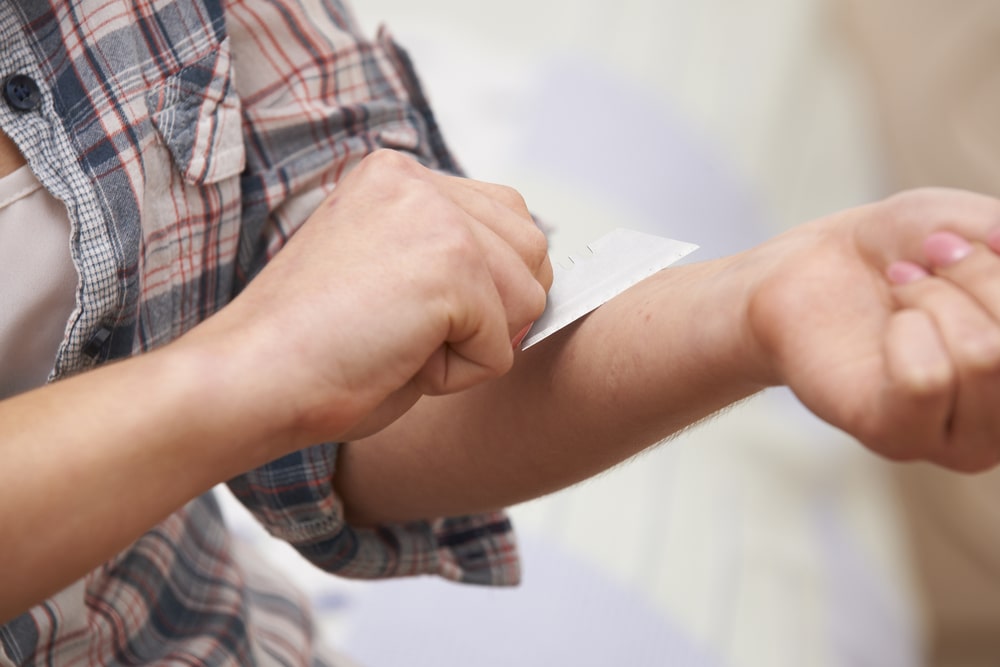 Why do people engage in self-harming behaviors?

People will engage in self-harming behaviors when they become overwhelmed with negative emotions and stress. Teens will self-injure to dissociate from tension or to distract themselves from emotional pain by replacing it with a tangible, visible and apparent physical pain.

Teenagers are at high risk for engaging in self-harming behaviors because they often do not have the emotional tools they need to cope with stressful situations and feelings safely. Often, those tools come with age and wisdom. It can be difficult for teens to fully process emotional pain and to make sense of it, which is why they may feel the urge to replace their emotional distress with something that is concrete and understandable to them, i.e., a physical cut or a burn.

In most cases, self-harm is not a cry for attention. Most teenagers are embarrassed or ashamed of their behavior after they commit an act of self-harm. Concealing self-harming behaviors and evidence is common, and it can be hard for parents to know something is wrong and subsequently intervene. Some of the most common reasons teens engage in self-injury include:

What self-harming behaviors are the most common among teenagers?

Self-harm among teens is more common than most parents would suspect. An estimated two million to three million U.S. adolescents hurt themselves on purpose to release negative, overwhelming emotions and shame. Unfortunately, those who practice self-harm often find themselves feeling guilty, and with low self-esteem after they self-harm. This leads to secretive behaviors and increases their chances of experiencing negative emotions in the future an engaging in more self-harming behaviors. The most common ways that teens self-injure include the following:

Who is most at-risk of engaging in self-harm?

Self-injury often starts in the early teen years, but anyone of any age, gender, ethnicity, or socio-economic status can self-harm. Teen girls are more likely to self-harm than boys.

Teenagers with symptoms of depression and anxiety are at higher-risk of self-harming than teens who do not suffer from these disorders. Also, teenagers with low-self esteem are also at-risk. Other risk factors include past and present abuse and neglect, bullying, death or a significant loss, and having an inability to cope with negative feelings in a positive way.

Teenagers who do not have a healthy relationship with an adult in their life may be at risk for self-harm. Having friends or family who engage in these behaviors, and also experiencing substance abuse or untreated mental health disorders can increase a teenager’s risk of engaging in non-suicidal self-injury.

In the past, non-suicidal self-injury was considered a sign of severe psychopathology. But current studies and research into this area have found that self-harm is generally used to cope with distressing emotions, and is not typically an indication of severe mental illness. However, untreated depression in teens is a significant risk factor for self-harming behaviors. Anger and mixed emotional states also put teens at risk of self-injury.

What are the signs and symptoms that a teenager is self-harming?

It can be challenging for parents and guardians to know if their child is self-harming because most teenagers will go to great lengths to conceal their behavior. However, these signs can indicate that an adolescent is hurting themselves:

There are also many emotional warning signs that a person is injuring themselves. Those may include things like an inability to handle or express negative emotions in a healthy way. Symptoms of depression, anxiety, or substance abuse can also accompany signs of self-harm. It’s important for parents and guardians to intervene early, so self-harm doesn’t escalate to a permanent injury or a suicide attempt.

What can parents do if their teen is self-harming?

It’s critical that parents understand that self-harming behaviors can become addictive and that teens need to have a way to form healthier coping mechanisms for negative emotions. Getting a teenager evaluated for a co-occurring mental health issue and reaching out to a therapist who is experienced with treating teenagers is critical to preventing self-harming behaviors from escalating. In therapy, teens can learn how to process their negative emotions and express them in healthy ways that don’t involve self-injury. Learning these coping mechanisms is a process, and change will not happen overnight. But therapy is a highly effective way to help teenagers heal from the trauma of self-harm.

Are you concerned that your teenager is hurting themselves? The mental health professionals and therapists at Mission Harbor Behavioral Health understand how difficult this is for your family. Our therapists and healthcare workers are experienced in helping teenagers overcome self-harming behavior and replace it with positive coping mechanisms. All calls and emails are confidential. Please contact us today to explore treatment options for your teen.