Mental health disorders can happen to anyone, and there is no single, known factor for why some people develop a mental health disorder, and others do not. Several aggravating factors can trigger underlying mental health disorders in susceptible people, such as stress, trauma, and substance abuse. In the United States, one in five U.S. adults will be diagnosed with a mental health disorder in a given year, while one in 25 will have symptoms so debilitating, they will need to be hospitalized. But it is estimated that less than half of all people with a diagnosable mental health disorder ever seek treatment for their symptoms. Economic and social barriers to care and a patchwork system of insurance laws and atomized medical facilities can make it difficult for people to obtain adequate medical treatment.

Both men and women can develop a mental health disorder, and in general, rates of mental health disorders for men and women are roughly equal. But, the reason why women develop symptoms, and the patterns of mental health symptoms and conditions are very different between the two genders. For example, women are more than three times as likely to develop depression and anxiety, and also suffer from somatic symptoms related to these mental health conditions. Unipolar depression is the second leading cause of disability worldwide, and women develop this condition at twice the rate of their male peers. Research has also found that depression in women versus men is more persistent and resistant to first-line medication treatments.

Men are more likely than women to experience adverse mental health symptoms related to alcohol abuse and addiction and are also three times as likely to be diagnosed with an antisocial personality disorder.  However, severe mental health conditions like bipolar disorder and schizophrenia strike both men and women in equal numbers. Women, however, are at higher risk of suffering from three or more comorbid disorders, which dramatically increases the risk of disability.

Other notable gender differences when it comes to mental health conditions are the frequency and persistence of symptoms, the age of first onset, how patients adjust socially, and what their long-term outcomes are for these conditions. For women especially, accessing care and obtaining ongoing support for mental health disorders can be challenging.

Keep in mind that these are lifetime prevalence rates. For example, these findings mean that 6.2% of women will experience panic disorder at some point during their lives.

Up to 20% of expectant mothers experience the symptoms of depression or anxiety during pregnancy. These disorders can directly impact the wellbeing of infants and children and make it harder for infants to bond with their caregivers. Studies have found that children of depressed mothers are at high risk of developing depression symptoms as children. The risk of pre and postnatal depression is highest in women who have already experienced these mental health disorders, and one of the most significant risk factors for these symptoms occurring both during and after pregnancy is if a woman with a pre-existing disorder discontinues her medication while pregnant.

Social pressures and increasing workloads at home and work can trigger mental health symptoms in women, and make it more difficult for them to seek care. For many women, unrelenting responsibilities to care for others can make it almost impossible for her to stay in an inpatient treatment facility. These responsibilities can also deter women from speaking to a doctor about their symptoms in the first place. Female patients with mental health disorders can significantly benefit from intensive outpatient treatment models and treatment that accounts for her unique caregiving responsibilities. Onsite childcare and flexible therapy schedules are ideal.

Also, one in four women will experience domestic violence at some point in their lives. Couple this alarming issue with women’s likelihood of earning less money than her male counterparts, plus caregiving responsibilities, and these types of stressors can trigger and also worsen mental health symptoms such as depression, anxiety, and PTSD. Treatment for mental health that centers around the needs of female patients must also address intimate partner violence and housing insecurity for women and how these risk factors can worsen their mental health.

What are the statistics on women and men who seek treatment and those who do not?

Women are more likely than men to reach out for help for mental health disorders, but they tend to speak to a primary care physician about their distress instead of a licensed mental health professional. Also, women are less likely than a man to commit suicide as a way to escape distressing mental health symptoms. Studies on mental health disorders in men and women have found that women who are mothers are less likely to attempt suicide than women who are not. Doctors are more likely to prescribe psychotropic medications to women than men. Studies have also found that when both male and female patients score highly on standardized measures of depression, doctors are more likely to diagnose women with depression, even if patients’ symptoms are identical.

Women are at increased risk of experiencing intimate partner violence and domestic abuse than their male peers. These traumatic experiences can significantly impact a female patient’s likelihood of experiencing mental health disorder symptoms and have a difficult time treating those symptoms without adequate, integrated care that addresses these triggers. In studies on female mental health disorder patients, women are unlikely to disclose to domestic violence issues and how these issues are triggering symptoms, unless doctors specifically address these concerns and ask patients directly.

Another unique barrier that women tend to face in higher numbers than men are the impacts of a mental health diagnosis on custody issues. Many women of small children are reluctant to reach out for help from licensed mental health professionals because they are afraid they will lose custody of their children. Decreasing the stigma surrounding mental health, and offering women treatment models that address their caregiving responsibilities can alleviate some of these pressures.

What type of treatment will women receive when getting mental health help?

Treatment for mental health disorders is never uniform from one patient to the next. Although mental health disorders are common, and millions of adults are diagnosed every year, care models need to address each patient as an individual. Symptoms can vary drastically for the same disorder, and many patients, especially women, will be dealing with comorbid conditions that require more advanced integrated methods. Patients who also struggle with drug and alcohol addiction will require treatment that addresses both disorders at once. When either condition is left untreated or treated as a separate issue, this can worsen the symptoms of either disease and impact the patient’s ability to heal and experience remission.

Another factor that treatment facilities need to address is the possibility of domestic violence in the home. For female patients in this situation, counseling with clinical social workers and therapists who specialize in these issues is critical. Women in domestic violence situations, with minor children in their care, may also need additional career counseling, and referrals to safe shelters or programs that help women obtain affordable, secure housing. Returning to an abusive situation after completing treatment can significantly increase the chances of a patient relapsing.

Women who seek mental health treatment are more likely to be victims of domestic violence. In fact, studies show that women who have serious mental illnesses are at a greater risk of suffering from domestic and sexual violence. Given the prevalence of this concern among women with mental illness, a gender-specific treatment program sensitive to women’s unique needs, including domestic violence history, may be preferred.

Female patients who are pregnant or nursing will also need special considerations during treatment. Many facilities that cater exclusively to female patients encourage prenatal and infant care. Expectant and nursing mothers are also at increased risk of pre and postnatal depression and anxiety.

If a woman has children, how does this affect her treatment plan?

Numerous studies indicate that treating mental health disorders in mothers drastically reduces the negative impacts these conditions can have on children’s development. Increasing access to care for mothers, that takes into account her responsibilities at home, is ideal for improving treatment outcomes. For maternal mental health, treatment should be integrated into a patient’s general healthcare, instead of treating these issues separately. Also, identifying certain risk factors for poor maternal mental health can help clinicians address and treat symptoms before they drastically decrease a patient’s quality of life and put her at risk of harming herself and her bond with her children. 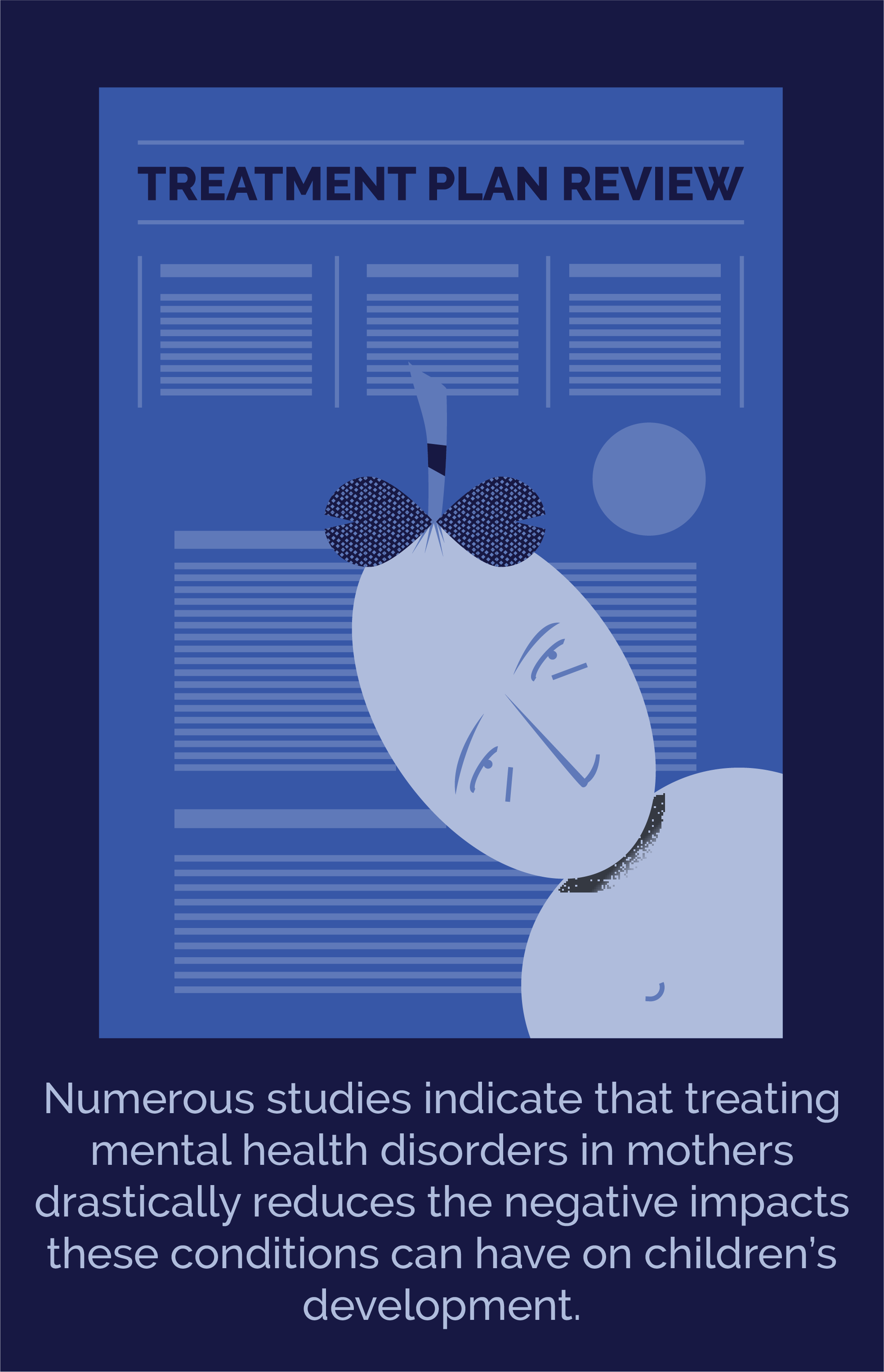 Do women generally take more, less, or the same amount of time as men to experience a remission of mental health disorder symptoms?

Treatment methods and the time it takes for a patient to recover varies significantly for each person. Mental health disorders and comorbid substance use disorder are chronic, life-long conditions that require lifelong maintenance and treatment. Maintenance plans, too, will look different for everyone, regardless of their gender. Women with mental health issues and comorbid substance use disorder tend to recover more quickly than men initially. However, women are at a higher risk of relapse. The reasons for this are not entirely known, but hormonal fluctuations, and the unique stressors and situations women face may have an impact.

No medication is considered 100% safe for all pregnant women and at every stage of the pregnancy. But the needs of the mother must be weighed against any possible side effects the medications may have on the developing fetus. For pregnant patients who decide with a doctor’s guidance to continue taking psychiatric medications during pregnancy, doses are usually lowered until the patient has given birth and is not nursing.

Another factor that may affect women seeking mental health care is the impact of poor body image. That is not to say that men never struggle with concerns related to their appearance, but female beauty standards may lead women to view themselves negatively, which increases their risk of depression and eating disorders.

Experts also warn that the biological differences between men and women may result in differences in how women respond to and react to psychiatric medications compared to men. For example, women may metabolize drugs differently or experience more severe side effects than men do. Women who seek mental health treatment should ensure that their provider is open to discussing medication risks and side effects and being flexible about dosing and the type of medication prescribed to meet a woman’s specific needs.

There are a variety of different types of mental health treatment for women, including therapies and medications. Ultimately, the best kind of treatment for you will depend upon your unique needs and situation. What is most important is that you find a therapist or treatment provider with whom you are comfortable. One common form of therapy that has been well-studied and found to be effective is cognitive-behavioral therapy or CBT, which can teach you new ways of thinking and how to cope with stress.

If you are seeking mental health treatment in Southern California, Mission Harbor Behavioral Health offers numerous types of mental health therapy, so there are options available to meet a variety of needs. CBT is among the therapies that we offer. We also offer multiple levels of care, including an intensive outpatient program with a flexible schedule suitable for women who are balancing the demands of family, motherhood, and work. Contact us today to determine the best level of care for you.